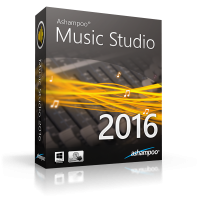 giveaway by shareware on sale

Edit and organize songs with ease

Ashampoo Music Studio 2016 is a proven software solution to rip, organize, edit and produce your music files. Aside from multi-format conversions and common features such as disc ripping, normalization and a powerful cover designer the program also gives you tools to record sound and organize your music collection. Select between various options to rename your files based on a coherent naming scheme, edit metadata or analyze your songs. The ability to extract audio tracks from videos or to create custom song mixes with cross fading complete the positive picture.