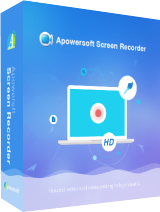 Simple yet powerful, Apowersoft Screen Recorder Pro is a nice choice for recording any screen activity as a video in high quality. It captures screen along with audio from system sound, microphone or both, and saves them in different video formats (MP4, WMV, FLV, AVI, etc.) and GIF. Aside from recording screen manually, it even provides task scheduler for capturing automatically during your absence. In addition, some useful features are also added to this screencast program including iOS recorder, advanced video editor and the ability to move recording region while making screencast.

Source: giveaway of the day